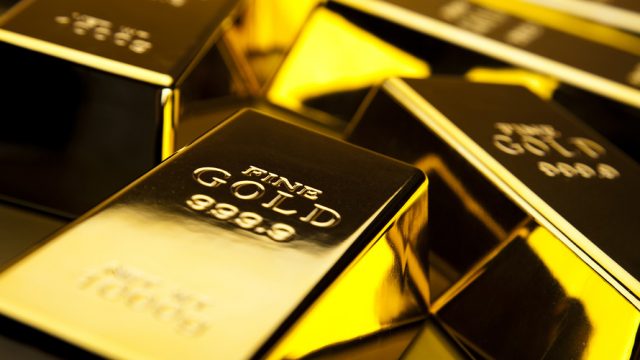 The entire process of gold mining can be broken down into four steps: prospecting, mining, extracting and refining.

Scientists, known as prospectors, search for gold deposits. Small scale miners can use gold detectors. This is known as prospecting. Sometimes, these deposits contain pure gold. In most deposits, however, gold is combined with silver or another metal.

After finding indications of gold, drilling is done to obtain samples from below the surface, which will be analysed for their gold content in a laboratory. If there’s enough gold in the deposit, mining operations can be set up.

How gold is mined depends on the deposits. Lode deposits are concentrations of gold found in solid rock. If the gold-bearing rock is located at the earth’s surface, the mining company will use open-pit techniques. First, miners drill a pattern of holes, which they then fill with explosives.

Next, they detonate the explosives to break up the ground so it can be loaded into haul trucks. If the lode deposit is located beneath the earth’s surface, underground mining is necessary. In this case, miners drill a shaft, or an adit, into the ground to access the lode.

Then they dig long vertical tunnels, known as stopes, that extend from the top of the ore block to the bottom. After the drill and load explosives into the ore block, the miners detonate the explosives, causing broken ore to fall to the bottom of the stope.

There, the ore is loaded into trucks and taken to the surface. Small scale or artisanal miners usually conduct their mining activities without the use of explosives.

Accumulations of loose gold in the sediments of a streambed or a beach — are mined differently. Miners scoop up sand, gravel and rock, and mix it with generous amounts of water. The gold, because of its greater density, sinks faster than the other materials and collects at the bottom. Many artisanal miners use a metal or plastic pan to separate the gold from sediments, a process known as panning.

Removing the gold-bearing rock from the ground is just the first step. To isolate pure gold, mining companies use a complex extraction process. The first step in this process is breaking down large chunks of rock into smaller pieces. At a mill, large machines known as crushers reduce the ore to pieces no larger than road gravel.

The gravel-like material then enters rotating drums filled with steel balls. In these drums, the ore is ground to a fine slurry or powder. Next, mill operators thicken the slurry with water to form pulp and run the pulp through a series of leaching tanks. Leaching dissolves the gold out of the ore using a chemical solvent. The most common solvent is cyanide, which must be combined with oxygen in a process known as carbon-inpulp.

As the cyanide and oxygen react chemically, gold in the pulp dissolves. When workers introduce small carbon grains to the tank, the gold adheres to the carbon. Filtering the pulp through screens separates carbon grains, which can be recycled for future processing.

Another set of screens filters out the carbon grains, which can be recycled for future processing. Finally, the gold-bearing solution is ready for electrowinning, which recovers the gold from the leaching chemicals. In electrowinning, operators pour the gold-bearing solution into a special container known as a cell. Positive and negative terminals in the cell deliver a strong electric current to the solution. This causes gold to collect on the negative terminals.

Smelting, which results in nearly pure gold, involves melting the negative terminals in a furnace at about 1,149 degrees Celsius. When workers add a chemical mixture known as flux to the molten material, the gold separates from the metal used to make the terminals. Workers pour off the flux and then the gold. Molds are used to transform the liquid gold into solid bars called doré bars. These low purity bars are then sent to refineries for further processing.

The final stage of gold production refining involves removing impurities that remain after the smelting process. Refining companies receive doré bars, as well as scrap gold, and reliquefy the metal in a furnace.

Workers add borax and soda ash to the molten metal, which separates the pure gold from other precious and less precious metals. A sample is then taken to a lab for tests, or assays, that measure the gold content. In most cases, the gold is 99.9 percent pure. Workers cast the gold produced during refining into bars.

For more information download our Miners and Suppliers Handbook below…

ZRP Confirms Arrest Of 4 More Suspects In Connection With Rushwaya’s...