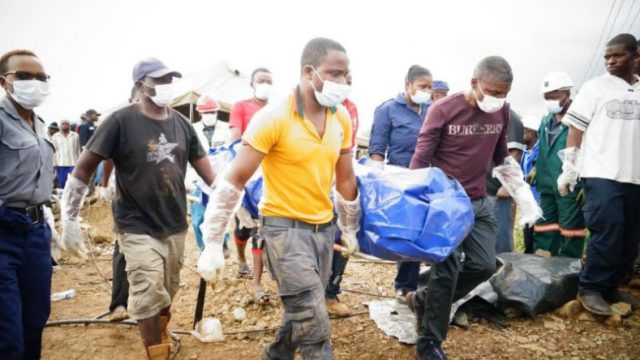 The government has released names of the miners who perished in the Battlefields disaster while efforts to account for the remaining four are still underway Great Dyke News 24 can report.
This comes after 23 illegal miners were trapped and feared dead after shafts and underground tunnels they were working in were flooded by water from a burst dam recently.
The Police released the names of the deceased as Jabulani Moyo of Village 12A Donnain, Battlefields, Josias Muzadzi (45) of village, Zhombe, Liberty Koke (26) of Village 9A, Gokwe, Augustine Chindoza (39) Chizembo Village, Bikita, Wellington Kwari of Whaley Range Etina Mine, Kadoma, Takanda Mushore (27), Kwekwe, Tobias Takaendesa, Kadoma, Winston Muziribo (22) of Makombe Village, Gokwe, Mayana Bvunzawabaya (27) Gore Village, Gokwe, Misheck Ncube (30) Kapoto Village, Mudzi, Keith Muderedzi (31) Village 10, Kadoma and Eborn Kaseke (24) Matarutse of Marondera.
Others include Thulani Sibanda (18) of Mbizo, Kwekwe, John Mufakose (29) of Gore village, Gokwe, Norman Billion (39) of Kadoma, Andrew Mharadze (26) of Mharadze village, Gokwe, Tinashe Shanda (22) of Mashinyira village, Gokwe, Givemore Munyengeri (42) of Plot 22 Silvermoon, Battlefields, Trynos Zindonye (31) of Hamandishe village, Gokwe, Clever Takaendesa (47) of Shurugwi, Tafadzwa Mubaiwa (22) Gonde village, Gokwe, Tinei Tembo (31) Plot 47 Silvermoon, Battlefields, Charles Jacob (25) of Jacopo village, Murehwa and David Martin (38) of Kadoma.
According to the Local Government, Public Works and National Housing Minister July Moyo, Government has committed itself to declare the incident as the State of Disaster saying they are committed to supporting the search effort to the end.
“We are here to say to the relatives of the victims that do not lose hope because Government has committed itself through the declaration by President Mnangagwa of a State of Disaster and we will support the search effort to the end.
“We will continue to visit you. Tomorrow (today) we are going to brief the President at Cabinet and we want to do it from an informed position,” he said.